Meet the Poets and Curators 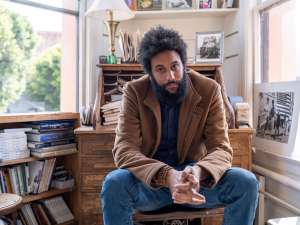 Originally from San Francisco, Tongo Eisen-Martin is a poet, movement worker, and educator. His latest curriculum on extrajudicial killing of Black people, We Charge Genocide Again, has been used as an educational and organizing tool throughout the country. His book titled, “Someone’s Dead Already” was nominated for a California Book Award. His book “Heaven Is All Goodbyes” was published by the City Lights Pocket Poets series, was shortlisted for the Griffins Poetry Prize, and won a California Book Award and an American Book Award. His latest book “Blood On The Fog” was released this fall in the City Lights Pocket Poets series. In 2020, he co-founded Black Freighter Press to publish revolutionary works. He is San Francisco’s eighth poet laureate. 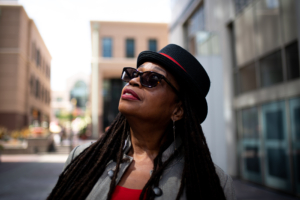 Ayodele Nzinga, MFA, PhD is a multi-disciplined artist, community advocate, arts educator, and cultural architect invested in designing structures that support cultural production, deconstruct whiteness, and the facilitation of self-directed community transformation and change. Working at the intersections of community well-being, cultural sovereignty, transformation, and change; Nzinga is referred to as a renaissance woman. She is an author, director, producer, thespian, dramaturge, member of Alameda County Women’s Hall of Fame, and the inaugural Poet Laureate of Oakland. Nzinga is the founding director of the Lower Bottom Playaz, Inc, Oakland’s oldest North American Theater Company, the only company in the world to produce the entire August Wilson Century Cycle in chronological order. Ayodele is also the founding director of the Black Arts Movement Business District, Community Development Corporation of Oakland a grassroots organization dedicated to the animation of Oakland’s only formally declared cultural district. 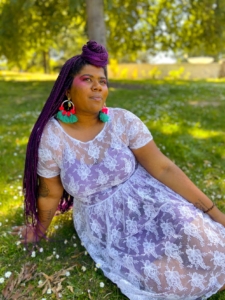 Alie Jones is a self-care advocate, writer, artist, and Creole mermaid. Currently pursuing a Masters in Creative Writing and Literature at Mills College. She is the Director and Co-founder of Black Freighter Press, a revolutionary press committed to the exploration of liberation, using art to transform consciousness. Alie graduated with a BA in Cinematic Arts & Technology from CSU Monterey Bay and a minor in Creative Writing and Social Action. She received her MPA from the Middlebury Institute of International Studies. Her work on Black Mental Health and self-care has been featured on Afropunk, xoNecole, and Medium.com. Alie is the host of the podcast called Chit Chat with Aliecat, she explores self-care practices and journeys of self-love in community. 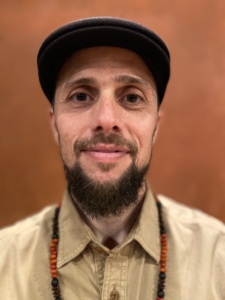 Jahan Khalighi is a poet, educator, and community arts organizer, born and raised in the Bay Area. He is an alumnus of June Jordan’s Poetry For The People, and a former member of the Eugene Poetry Slam Team. As Program and Events Director at Chapter 510, a youth writing, bookmaking and publishing center in Oakland, he works to co-create safe and supportive spaces for Black, brown and queer youth to bravely write.  As a spoken-word artist, he has been a featured performer at TEDxSonomaCounty, YBCA, Mission Cultural Center, Bioneers Conference, and Esalen Institute. His work has been published in Whoa Nelly Press online journal. 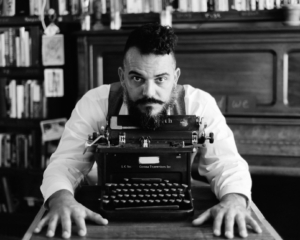 J.K. Fowler is the founder and executive director of Nomadic Press, a community-focused literary and arts non-profit with operations in Oakland, CA, Des Moines, IA, and Brooklyn, NY. He has spoken to classrooms and organizations on small publishing and the art of making space all over the nation. He currently sits on City of Oakland’s Cultural Affairs Commission (where he spearheaded the launch of the first Oakland Poet Laureate Program in 2021), acts as the Co-chair on the board of North Atlantic Books, acts as Secretary on the board of the Oakland Peace Center, and previously sat on Cogswell College’s English and Humanities Professional Advisory Board. He has taught anthropology and sociology at Rutgers University Newark, and has guest lectured at Mills College. 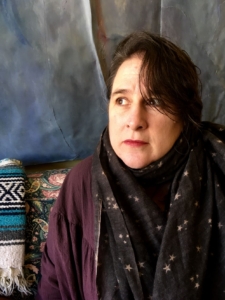 Kim Shuck was born and raised in San Francisco, of a mother who was born and raised in San Francisco and then her kids similarly… San Francisco. Shuck served as the 7th Poet Laureate of her city for three and a half years. Shuck is solo author of eight books, contributing author to others, editor or co-editor of sevenish more, the eighth is currently in layout. She was an inaugural National Laureate Fellow through the Academy of American Poets and has been awarded a PEN Oakland Censorship Award, a Northern Book Awards Groundbreaker honor, and a KQED Local Hero Award, among others.  Kim has hosted/curated roughly four poetry events every month for the last five years or so, her lifetime total of poetry event curation is north of 1,000. Her latest solo book is Exile Heart from That Painted Horse Press. To read more, some of it even surprised Shuck, https://en.wikipedia.org/wiki/Kim_Shuck Her Goldbergian website can be found at kimshuck.com 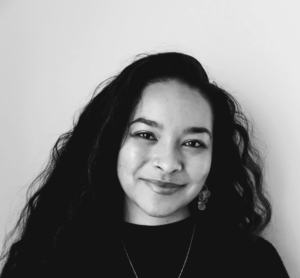 Living at the intersection of Blackness, womanhood, art, and activism, Nia McAllister is a Bay Area born poet, avid reader, and environmental justice advocate. In her current role as Public Programs Manager at Museum of the African Diaspora (MoAD), Nia creates participatory spaces for creative expression and literary dialogue. She leads the museum’s literary events under the MoAD Lit program and is the host and founder of the Open Mic series at MoAD. Nia’s writing has been featured in Radicle magazine, Poets of Color Podcast, San Francisco Public Library’s Poem of the Day, Nomadic Press Dial-A-Poet Series, and is forthcoming in Meridians journal.